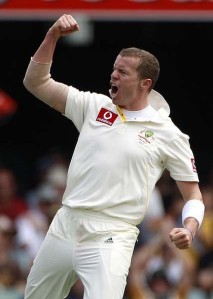 1st test,Australia Vs England,Brisbane,Day1
The Gabba test is very much alive after the first day and look who is in the driver’s seat, it’s the Aussies.The OZ was greatly inspired by the breathless spell of Peter Siddle which took away the wickets of Colllingwood and KP and the English honor was restored slightly thanks to Cook and Bell but another fierce spell from Siddle which earned him a hatrick of wickets of Cook,Prior, & Broad . this was eventually the second 5fer for siddle in the ashes,he eventually finished with career best figures of 6-54. the much expected Johnson did not fire. but no worries Siddle did an exceptional job and put Aussies on top.The OZ started their innings very brightly and finished the day @ 25-0 in reply of English’s 260. The pitch had nothing to do for Eng’s downfall and they have only themselves to blame for it. The wicket looks too good for batting and Nobody would be surprised if the Aussies make merry tomorrow . If Eng does not make up for he lost ground through their bowling the Test is almost over and Eng can add this test too their infamous list of poor starts to the Ashes.
Barmy Army is being Kept quiet and the Aussies aren’t treating them as good hosts giving them more things to cheer about.
Let’s hope”Eng have a good day and the test to get evenly poised”
GOOOOOOOOOOOO AUSSIES…….