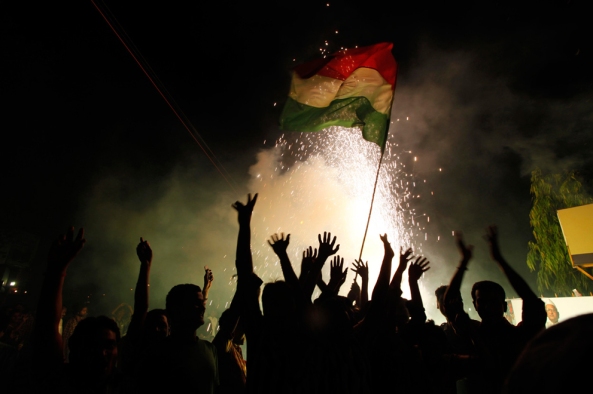 Ever Since I started watching Cricket, which is from 1996 Wills world cup, the one thing my father kept on Bragging to me was that he had watched India Winning the World Cup and always kind of teased me that I was not as fortunate like him to see that kind of euphoria or the thrill or joy that he has witnessed. Further, he would always add that the joy I had when sachin hit an blazing 143 in sharajah which was the greatest cricket moment I have witnessed was like a dust compared to what joy he had when India lifted the world cup . My father always made me watch that victory of 1983 final whenever it was telecasted and I was also watched it very much in eagerness of what was all the excitement he was talking about and I could not absolutely sense it but seeing the tiny curve of unexplainable painful smile my father would have every time when the moment where Mohinder amarnath runs towards the balcony with all his smiles and one stump in his hand always had me in an confusion of what was running through my father’s mind. The World Cup after World cup passed and we missed winning it in one way or the other sometimes, my father would say that my generation may not have the luck to witness it. Then CWC2011 held in India.
I have just joined a job and was placed in Mumbai and World Cup was happening alongside my life just like any another tournament and to be frank the CWC 2011 started on a slower side and it initially crept to reach the glorious thing it turned out to be. The League phase was over(at last!) ,No real surprises this time like the previous world cups, no minnow team made to quarters this time and that in itself was good news for the organizers . India was to face the Current Champions now the not so mighty Aussies they used to be but still was much of a challenge to face in the quarter-finals , Yuvraj the Prince of the World cup worked up his magic and helped India Breeze past the current Champions meanwhile Pakistan made an abomination of a win against Windies and the Mother of all Rivalries was set to happen in one of the largest stage in Cricket in a Semi-Final . The people of both the countries could not wait for the match and one might even say that the hospitals in both the countries had their fleet of Ambulances ready for emergencies that could occur on that fateful day. Believe me or not I watched and shared the you-tube link of Aamir sohail bowled by V.Prasad nearly 100 times in that few days . Though the game did not meet the humungous expectations it had but, lest of all India thumped the Pakistani’s and won yet another World cup match . Yes, winning a match against Pakistan is above winning a Semi-Final . Now that we have breached and conquered two of the most consequential and toughest of Barricades .Now, only our very own island Neighbors where left to be conquered and every minute of the remaining days my heart and soul was repeating unconsciously these words “No, please not From Here….For God’s sake do not from Here” .
The Gracious day came, the Whole of Mumbai was buzzing with pride of a CWC Final in which India is Playing is being held in their land . The Ticket price was sky rocketing and I bailed out of that Idea of even having an idea of even trying for a ticket . It was a Saturday and I had to work as it was a financial year end and I left from work in the after-noon catching my train from kurla ,ordered my lunch parcel by phone and when I reached the house it was already the 5th over being bowled . Then Jayewardene as he usually does spoilt the moods of millions scoring a Gracious Ton and the myth “ a ton scored on a final never went in vein “ sunk deep in every Indians heart . Then came the early strikes of Sehwag and Sachin by Malinga , at that point of time I almost made a villainous scheme of murdering Malinga but then Kohli the future and Gambhir the Finesse asserted control and when Kohli went back MSD walked in and in such solidarity he grinded the tooth of the Lankan attack and made the match like what it now looks like in the Match Summary Scorecard . That Six of Kulasekara ,that one final strike, that one final thud ,that one final stroke, that one final nail in the coffin, that one final bat meeting the ball, that one final jolt of joy India witnessed and That Is It we are the Champions!.
I wasn’t with my Father when that Six was hit but I called him over Phone and I shouted like a crazy escapee from an asylum but till date I forgot to mention or ask him this “Is that how you Felt on 1983?”. Lest! When you yourself know the answer why should you pose a question .
Yes dad, I know. This is exactly how you would have felt on 1983 When Amarnath took that last wicket . Dad, I now knows what that tiny curve of unexplainable painful smile you had every time you see the footage and now that I too have felt it . It was the “Inner Cry of Joy”